This is a very special dress to me, I think it’s the only dress I own with a not-cinched waist. Despite that, it’s amazing in any circumstance. In this case, casual, at the office…

Call me lazy, but instead of doing the thinking,  I’d love to be able to type the name of an object in a database, hit enter and be served with a list of things of a similar shape.

Rope would get your these results: snake, wire, hair, hose, … and so on.
Maybe this could be a user-managed database since each object would be defined compared to another one (and not only to a trait).

What for? Visual analogy is one of the methods used in advertisement. Finding those never-seen before combos requires not to think logically but purely by association of shape, use, effect…

I found a rather interesting document: “A Computational Model for Visual Metaphors” from German and Indians researchers and I quote:

“Perceptual similarity seems to play a major role in the generation and interpretation of visual metaphors: Two conceptually different objects are associated with each other due to their similar appearance. Based on this new alignment, conceptual properties of the source can be transferred and applied to the target, which enables a completely new, metaphoric interpretation of the target. In this paper, we suggest a formal framework to analyze metaphorical relations: HDTP (Heuristic-Driven Theory Projection) computes an interpretation via a mapping based on common facts describing the visual appearance. Afterwards it transfers conceptual properties.”

Now I need to find out what came out of that…
To be continued.

These were taken at Petit Gateau’s stand last week-end at a bridal fair in Antwerp. I worked with Petit Gateau for my latest project “Let her eat cake” 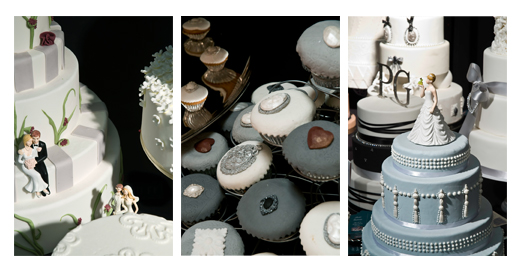